In episode 7 of Media Curious award-winning journalist Cheryl Corley talks about what it means to cover the Midwest and beyond for National Public Radio’s national desk, serve as one of the outlet’s criminal justice reporters, the time Chicago got “out-Chicagoed”, and other memorable stories.

Media Curious collaborators include Chicago Public Square, The Eventors, CAN TV and the lovely and talented Jane Ricciardi who through her post-production skills adds polish to each episode.

Karen Kring started Media Curious in June 2020 to help bridge the gap between the media-consuming public and “the media”. Karen believes the media, the news media specifically, tend to be individuals who’ve dedicated themselves to being a conduit for the truth, to accurately reflect facts they’ve learned while covering their beats. That said, Media Curious lets the public make up their own minds. Karen talks to news media workers about their jobs, what goes on behind the scenes in their newsrooms and their perceptions about the industry in the current era.

Karen Kring here: I’d been sharing news stories that offer glimpses into what it means to be a journalist in this day and age on Twitter via @Media_Curious for a few years now.

It has been my ambition to start a podcast that would offer the public the chance to know Chicago area news and media workers better, get a behind-the-scenes glimpse into some news rooms and to gain some perspective on what media is about in the 21st century.

I still might do the podcast, but upon getting familiar with Zoom’s technology, I chose to start with video.

So at last at the end of May I did my first interview with my friend and colleague Maudlyne Ihejirika.

She is an award-winning columnist with the Chicago Sun-Times. She writes the paper’s Chicago Chronicles, long-form columns on what makes the city click. She recently penned a book about her family’s survival during the Nigerian-Biafran War and the miracles that brought them to the U.S. in 1969, Escape from Nigeria: A Memoir of Faith, Love and War.

One afternoon Janet Sutherland left work to walk her dog. Without warning she was struck with the worst headache of her life. She was experiencing a ruptured brain aneurysm.

That was sixteen years ago. She was left blind and paralyzed. Given a three-percent chance to survive, Janet beat the odds. Today she’s recovered and thriving.

Following her recovery, she’s put much of her spare time into building awareness around brain health and increased funding for research.

To date, she’s written Nose Over Toes, a book about her recovery that includes research from The Brain Aneurysm Foundation.

She founded the Brain Aneurysm Foundation’s Chicago chapter, serves as the Illinois Ambassador for the foundation’s Stop The POP campaign to promote awareness, and is the founder and chairman of the foundation’s annual walk (which is hoped to happen in September 2020, if the pandemic subsides enough).

For the majority of the past decade, Janet has lobbied Congress for measures that would increase awareness of brain aneurysm and increase funding for research. Her goal is to make sure Congress passes a bill called Ellie’s Law, which would authorize an additional $5 million each year for five years for further research of brain aneurysms.

Recently I dug a little deeper into Janet’s life:

KK: You’ve written a book about your grueling recovery from your ruptured brain aneurysm, Nose Over Toes. What coaxed you into writing it? What do you hope to accomplish from it?

JSM: I was lucky that my father maintained a journal, which I included in my book, as well as research from the Brain Aneurysm Foundation. My parents believed in helping others and felt awareness of brain aneurysms was very important. They always felt this was something very important I should continue. I hope this book will help caregivers and survivors in the recovery process and they won’t feel alone.

KK: Nose Over Toes is your most recent book, published in March 2019. Where did you get that title?

JSM: The title “Nose Over Toes” came from a prompt physical therapists use for people they are trying to learn how to stand up. “Put your nose over your toes.”

KK: What was the hardest part of Nose Over Toes to write?

JSM: The hardest part was going back and reliving such an unbelievable tough time of my life. I also learned parts of my recovery I was not aware of and tapped into emotional parts of my life I didn’t want to deal with.

KK: You experienced your ruptured brain aneurysm in March 2004. What happened to get you physically where you are now?  Do you have any lingering challenges?

KK: How have you changed, or what have you learned, during the sixteen years since your brain aneurysm ruptured?

JSM: I have learned that life experiences will help you tackle a big challenge and turn into a big lesson.

KK: Your husband, Kevin Madden, has been an advocate for survivors since you both started dating. He too is at risk for a brain event. Tell me more about that.

JSM: A year ago we discovered my husband has an AVM in his brain. An AVM is an arteriovenous malformation which is a tangle of abnormal blood vessels connecting arteries and veins in the brain. Kevin was born with it. There are many complications which could include the AVM rupturing like a brain aneurysm.

KK: What do you think more people should understand about brain health?

KK: What can anyone do to improve their own brain health?

JSM: Don’t smoke, keep your weight down, watch your blood pressure, exercise, limit alcohol consumption and keep in touch with your physician.

KK: If someone wants to read Nose Over Toes, where can they get a copy?

JSM: To find Nose Over Toes, you can stop by the store in The Gnome Colony in Glen Ellyn, IL or order it online at www.noseovertoes.com.

Below is what DNAinfo, staff, readers and advertisers were greeted by when they went to DNAinfo’s New York City and Chicago website that Thursday.

More about this from…

New York Times: DNAinfo and Gothamist Are Shut Down After Vote to Unionize

New York Times: A Billionaire Destroyed His Newsrooms Out of Spite

Joe Rickett’s Blog: Why I’m Against Unions At Business I Create

Newsweek: Gothamist and DNAinfo Are the Latest Victims of the Billionaire War on Journalism

WTTW’s Chicago Tonight: DNAinfo and the Challenge of Hyperlocal News

Jocelyn Geboy: How The Dismantling Of DNA Info And Chicagoist Hurt Us All

In early October 2017, Chicago’s own Kelly Leonard was one of the dreamers, thinkers and doers presenting at University of Colorado/Colorado Spring’s TEDx. He talked about “strategic discomfort”, the magic of improv and a new partnership between Second City and Center for Decision Research at the University of Chicago Booth School of Business.

The TEDx’s theme was CURIOSITY, a topic near and dear to Karen Kring’s heart.

And in case you didn’t know, Kelly hosts a podcast, Getting To Yes, And.
He also co-authored a book, call, yes, that’s right, Yes, And. 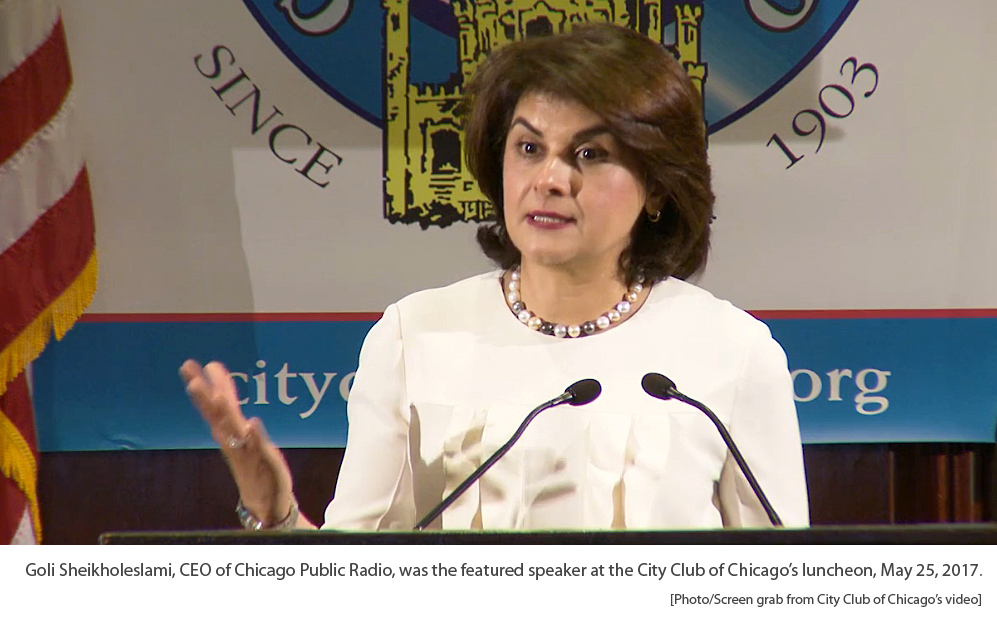 Goli Sheikholeslami, CEO of Chicago Public Radio, explained why strong, non-partisan journalism matters to the health and wealth of our communities, our country and every citizen during the City Club of Chicago lunch program on May 25, 2017.

Shannon Heffernan and her story Excruciating Choice: Trading Parental Custody for Mental Health Care was mentioned as an example of a story that helped move the State of Illinois to act to stop psychiatric lockouts and helped legislators access data about lockout previous unattainable. (Heffernan’s work garnered a 2017 Lisagor Award.)

Sheikholeslami also mentioned an investigation that revealed that more than 300 young people were kept at Cook County Juvenile Detention Center for for as long as a week after release orders were signed. One young man waited 190 days for DCFS to pick in up. Due to that report, a monitoring system is in place and fewer young people are stuck in jail needlessly.

She also shared the audio from a story about why people pick up guns.

Distrust of media, threats to our fragile media landscape, drastic newsroom staffs reductions and their affects our country were discussed, as well as the opportunities and threats that lies ahead for hers and other media outlets.

We’re pleased to announce that Cheryl Harvey Gorey has joined our team. She’ll be the on-site stylist for our May 21 BizPics shoot.

Hope you can come and take advantage of one of the few Sundays she’s available to do make-up and hair for BizPics.

Cheryl is a much sought after make-up artist. Known for her outstanding work for high-profile clients ranging from TV, film and sports celebrities to CEOs, she can now include BizPics participants to her roster of notables.

She loves her job, enjoys make a positive impact on everyone she encounters on the job she’s been doing for close to 30 years.

Cheryl is a common sight on Blackhawks’ ice.